You are here: Gaming and other Nonsense » Pathfinder

This website uses trademarks and/or copyrights owned by Paizo Inc., used under Paizo's Community Use Policy (paizo.com/communityuse). We are expressly prohibited from charging you to use or access this content. This website is not published, endorsed, or specifically approved by Paizo. For more information about Paizo Inc. and Paizo products, visit paizo.com.

The City of Monuments

This is a Pathfinder campaign I ran set in Magnimar, with modifications for a more low fantasy, urban campaign setting.

The theme of the game would be a group of city dwellers working with/against a number of factions in the city, such as thieves, merchants, nobles and other more unusual groups. Needless to say, rules from Ultimate Intrigue are probably going to feature.

It is expected that the level cap for the campaign will be 6th - 9th level. There won't be a hard cap as such, but experience awards will tend to level out, making progression beyond this slow.

Players can each have up to three characters defined. Only one character can be in play at once, but other characters can be used as either backups in the case of death, or as options when a particular adventure calls for a different skill set.

The primary character is the one being actively played. The other characters count as secondary. To be valid, a secondary character must have a name, race and class defined - though particular attributes and skills don't need to be fleshed out until they enter play.

Only one of your characters can be non-human at any given time. None of them can be the same class as another. For multi-classed characters, all classes count in this restriction (so if you have a fighter/rogue, other characters can't have fighter or rogue levels).

You may retire a character at any point. It will become an NPC controlled by the GM.

Characters do not gain a +1 bonus to an ability every four levels. Instead, every level after first, you gain 1 point to spend on raise ability scores using the purchase method. Costs are considered before the +2/-2 modifiers.

Costs after character generation for abilities above 18 follow a similar progression: 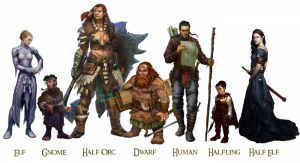 It may be possible to encounter other races during play, and pick one up. For example, if you encounter a tribe of Ratfolk and befriend them, one of them might be willing to tag along and join the group as a PC. Merely meeting a Tiefling in the marketplace doesn't count.

The following classes are allowed. Some aren't either because they probably won't fit into the style of the game (e.g. Paladins and Druids), because they focus on rules I don't want to bring in (e.g. Gunslingers) or because I don't want the hassle of them in Roll20 (e.g. Summoners).

Occult Classes: Not at this point in time, but willing to consider. I will probably bring them in as NPCs first to see how they play.

Prestige classes must be gained through roleplay, not simply 'levelled up' to. Prestige classes cannot be taken before 6th level. Some, such as the Mystic Theurge are simply banned.

Human characters may start with up to 3 background traits. Non-humans may take a racial trait, plus up to two other traits.

Hero Points will not be used.

Magic items which require a caster level higher than 3rd are not commonly available anywhere (using the 75% chance rule).