You are here: Gaming and other Nonsense » Hestmark Highlands

The Hestmark Highlands are a region of dry hills and plateaus east of the County of Sunndi, on the coast of the Aerdi Sea. It is mostly populated with dwarves and gnomes, though the recent upheavals have led to the expansion of goblinoids into the region.

The main city of the area is Dullstrand.

A Former province of the Great Kingdom that has recently declared independence. Has a high tolerance of all the human and demi-human races. It would like to bring The Dullstrand under its control though.

They have recently claimed a lot of land to the south west, and seek to dominate the region.

To the north, the remnants of the Great Kingdom seek their own domination of the region, and many of the recent goblinoid incursions are due to them.

The Drow have been manipulating events here for a while from their cities in the underdark. Behind it all seems to be Eclavdra of House Eilservs, and the focus of the campaign is now shifting to deal with her.

The party has finished clearing out a group of Goblins and Hobgoblins who had taken over the ruins of an ancient Suloise temple. The temple has had many occupiers, from the original Suloise, their elven slaves and also a Beholder Cult worshipping Beltar the goddess of malice.

They have rescued a monastery of Pelor from a group of Bugbears and evil Monks of the Scarlet Brotherhood, who seem to be in league with a group of goblins led by 'King Nak', as well as possibly some Drow and a Necromancer to the south in the Vast Swamp who seems to be managing it all. The party managed to kill a small dragon, then discovered that it's mummy was very upset.

Whilst making a raid on King Nak, the party are forced to escape using a plane shift when cornered by hill and stone giants. They turn up in the Seven Heavens, and are sent back just in time to rescue a town from an attack by a much of vile cultists.

The cultists dealt with, they are ready to raid King Nak again. They now have a lot more info about him (apparently the cultists were also Scarlet Brotherhood, but consider the Necromancer a renegade, so were planning their own attacks), and the Drow that are working with the goblins.

King Nak has been defeated, as has the Drow priestess who was dealing with him. The last of the Drow and their minions have also now been cleared from the area, leaving the way clear to the Underdark.

Rather than head immediately down into the Underdark, the party decided to deal with the Scarlet Brotherhood Necromancer known as Kel Aval first though, who was located in the Vast Swamp. He lived beneath a shining tower that stood in the middle of a town of Lizardfolk. Beneath the tower was an ancient tomb that had been inhabited by various factions over the centuries, including some priests of Pelor who had hidden the evil artefact known as the Eye of Vecna here.

Eventually the tomb was cleared of undead, and the Necromancer/Lich was slain, putting an end to the plans of the Scarlet Brotherhood in the region (at least for a while).

Seeking a way to destroy the Eye, they headed to Sigil, also known as the City of Doors in the outer planes. A Githzerai lore master there known as Mr Croop was thought to have the knowledge and capability to destroy such artefacts. Unfortunately, Mr Croop is kidnapped during negotiations by some Planetars and the group has to try and rescue him. It turns out to have been the god Thoth behind the kidnapping, and after a trip to a demi plane deep inside the Astral they rescue him and hand over the Eye.

The group are now heading down into the Underdark to deal with the Drow.

Included here are some of the maps from the Roll20 campaign. These are the base maps, without the various bits of dungeon dressing added within Roll20, so in some cases stairs, tables, altars and floor markings may be missing.

An investigation into a goblin lair resulted in a discovery that it was built on top of an ancient Suloise temple filled with undead, including a demi-lich (which was left well alone).

The following maps are each standalone. The first is of a small village, the second of a Bugbear camp and the third was a stronghold for a group of devil worshippers. Each map is 4200x3150px (60×45 squares) in size. 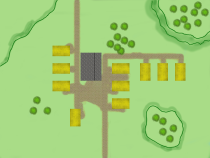 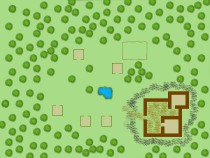 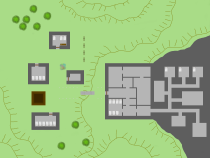 The Goblin King Nak ruled from his stronghold near a river. The above ground map is 9450×6300 pixels in size (135 x 126 D&D squares, at a scale of 70px = 5ft), so is included here as an archive of tiled images which were actually used in Roll20. The below ground map was a stronghold of the Drow, which led to the Underdark. 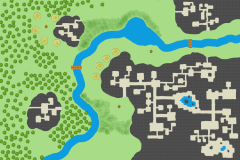 In the Vast Swamp was a town of lizard folk that had grown up around a magical tower. The tower consisted of three floors above ground, and two below the ground before opening up into an ancient complex of tombs in which the Necromancer himself lived.

The dungeon map is 9450×6300 pixels in size, at a scale of 70pixels = 5ft. As per most of the maps here, it doesn't include the dungeon furnishings which are added within Roll20.

Heading down into the Underdark, subterranean warrens full of Trolls, Troglodytes and Drow were explored and cleared out. This was for the first part of D1 - Descent into the Depths of the Earth. The map for this is another large one - 9800×6440 pixels - and based on the map in the original module.

Crossing the Svartjet River the groups encounters an outcast Drider. This map is one where I spent some time trying to make it look nice as well as simply functional, and played with some translucency effects on the water. It is a much smaller map - 2800×2800 (200ft x 200ft) - than some of the previous ones, and was more a place to have a conversation (or quick fight) rather than a place to explore.

The cavern walls do appear unnaturally straight. This is because all vertices are based on the 70×70 grid used by Roll20 which makes it very easy to draw the lighting layer on top using snap-to-grid. If this isn't done, then the line of sight don't follow the cavern walls accurately, and it looks messy in the game.

The lines that define the cavern walls are 20px wide, which means they overlap into the visible area after the lighting layer has been put down. Players get to see just enough of the walls to get an idea of what they look like, rather than hiding them completely behind blackness.

City of the Duergar

The back way into Grondarg, city of the Duergar, used to be defended by a gate at the start of their road. However, over the centuries it has fallen into disuse, and ways around it created by purple worms and other creatures.

There are a few dusty rooms near the gate, and a once impressive road and hall which have fallen into disrepair. 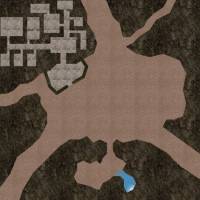 A Drow checkpoint controlled by House Aleval. This House is opposed to House Eilservs, and is more than happy to provide a bit of help and advice to anyone causing trouble for their enemies.

The central cavern has a small fortified Drow checkpoint, at a junction of three primary passages. There is also a secondary (20ft wide) and tertiary (10ft wide) passage leading away from the junction. The small cave with fresh water (and a waterfall) makes for a good rest point for travellers.

Shrine of the Kuo-Toa

The Shrine of the Kuo-Toa is the final part of the classic D&D module of the same name (D2), and concludes the second part of the adventure series. It consists of a central shrine to the Sea Mother, the goddess Blipdoolpoolp, as well as various priestly quarters and birthing pools.

Unfortunately, this map never really got used. I did it last year, before I realised that a dungeon bash type of adventure (which this map is best suited for) doesn't work for epic level characters. The PCs met the Priest Prince in the shrine and came to a deal to help each other against the drow, and that was it. 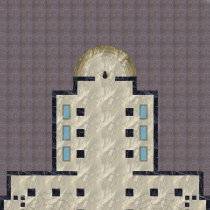 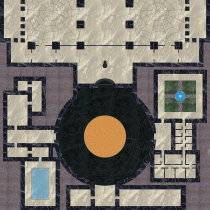 The Great Fane of Lolth is where the final battle of D3 The Vault of the Drow takes place. The core of the temple is a black web, that surrounded a column of amber liquid of negative energy in which dwelt Lolth's Huntsman, a demi-god servant sent to aid Eclavdra, the High Priestess. I decided not to have the group fight an Avatar of Lolth at this point, since even though they were Epic level, deities in 3rd edition are somewhat more powerful than they were in 1st edition.

Living quarters for the drow acolytes surrounded the core, and there was a gateway to the Spider Web Pits (in the Abyss) at the end of the long room in the south east.