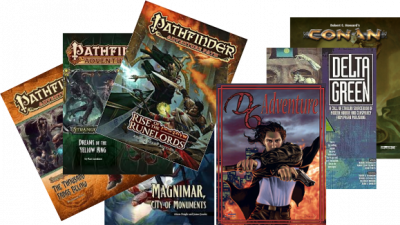 2018 was a fairly predictable year for us as far as gaming has been concerned, given that most of it seems to have involved Pathfinder. We have had four Pathfinder games on the go over the course of the year, two which I've run and two which I've played in.

First, there's been my City of Monuments game on Roll20, which has been a relatively low powered Pathfinder game set in the city of Magnimar. Being city based, the game has been a lot more socially focused, with actions having potential repercussions on how the group are viewed in the city, and sometimes getting into trouble with the law because they can't just kick down doors and investigate in traditional murder-hobo fashion.

I also ran the fifth chapter of Rise of the Runelords - Sins of the Saviors. Though this was probably the most dungeon crawl-like of this adventure path, it went quite well, though I learned that getting and painting miniatures for all the creatures is a lot more expensive and time consuming that I'd expected. This path started in 2014, and I'm hoping to finish it next year.

At the beginning of the year I tried something different - a one shot adventure set in 1920s Europe using D6 Adventure. The group were a bunch of German (pre-Nazi) secret service agents, tracking down a defecting spy on a very pulp adventure that took them across to Indonesia, with a bit of the supernatural thrown in for good measure. It worked quite well, but the characters seemed a bit overpowered for my tastes, so if I were to run it again, I'd look at either dropping the power level, or upping the opposition.

In terms of what I've played, we also tried Delta Green on Roll20. There was far less need for tactical combat maps compared to Pathfinder (no real surprise there), and it worked quite well and was a lot of fun. The GM made heavy use of real places, and allowed us to use Wikipedia and Google Maps to do some research into things (after all, the game was set in the modern day). We ended up on Devil's Tower, dealing with strange other world entities. Much as you'd expect.

On the Pathfinder front, there was further continuation of Serpent's Skull and Strange Aeons. The former has been our monthly tabletop game, that has been going on almost as long as Rise of the Runelords. We just completed session 52, and are in the fifth chapter of this. It has a relatively standard party of Ranger, Barbarian, Rogue, Cleric and Wizard.

Strange Aeons is the Cthulhu-themed adventure path, which has a different feel to it. My other half is running this, and is a big Cthulhu fan (she also ran the Delta-Green game), so there's a lot more background and detail going on than is probably in the base adventure. This is also an unusual game for us in that we don't have any 'core' characters - I have a Spiritualist, then there's an Inquisitor, a Shaman and an Arcane Archer (probably the most standard character of the group). We did also have a Swashbuckler, but the player for that left to wander the world (seriously).

Finally, we also played the 2d20 version of Conan. This is quite good fun, though definitely leans on the heroic side of fantasy rather than gritty. I like some of the mechanics, and we seem to be able to make good use of the momentum rules - my overpowered warrior can generally generate plenty of momentum for the rest of the group to be able to use. This has been a game we've tended to play in between other games, which has given a break from the various adventure paths.

So 2018 has been a year of mostly standard games, with a lot of Pathfinder. I'm not a huge fan of the D&D systems, but it's something we all know, and I think it's the best implementation I've played. There's definitely a lot of options available which makes it fresh, but can also make it a bit overwhelming at times. I'm also not sure that adventure paths are meant to take 5 years to complete, or whether that's just because we tend to chop and change between systems and campaigns several times a year.

With three regular games ongoing though (one weekly on Roll20, one monthly tabletop, and one weekly tabletop) it's been a relatively full year of gaming.