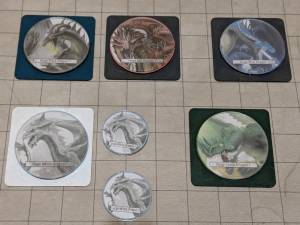 Starting my preparation for the last instalment of Rise of the Runelords, and again taking a different approach to how I represent monsters on the table. For the 5th chapter, I tried to use actual models wherever possible, but that was both expensive (even using plastic Reaper Bones for most of them) and time consuming.

This time I'm looking at something both cheaper and quicker. I'm drawing up tokens in Inkscape, and then printing, cutting and gluing to an MDF base of the appropriate size. I then put a clear plastic base on top, to protect the paper image and allow the tokens to be marked with dry wipe pens.

One problem I had, was I find round tokens don't work well at large sizes. Pathfinder uses square bases for everything, so a round base for a Huge or Gigantic creature makes it non-obvious that the creature also fills the corner squares. Where I source the clear bases from (https://wargamesbuildings.co.uk), don't do square clear plastic bases. After some thinking, I figured I could do all the tokens as round, then stick them onto a square backing base. This seems to be working fine.

I've also done some flight stands, which are constructed from two old Games Workshop flight stands, with a base stuck into each end of the stick. Each stand has magnetic basing material on the top, and a metal base stuck to the bottom. Not only can they be fixed to larger sized bottom bases (to make it clear where a large flying creature is, and for extra stability), but it means they can be stacked without falling over. Sticking metal bases on the bottom of character figures or flat tokens means they also don't fall off the flight stands.

The metallic basing material can be obtained from the same place as above. I can't remember where I got the metal bases from though.

Doing tokens this way also means they take up far less room, and are a lot more durable and portable than actual models. I'll still use some models for the important creatures, but it should greatly simplify everything else.