You are here: Gaming and other Nonsense » News » Surprised Mooks 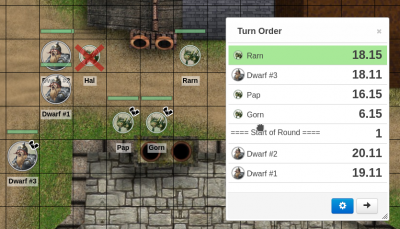 I've made some updates to my Roll20 combat scripts, to automate some of the initiative handling. The initial option was a command to add multiple tokens to the initiative track. I already had this, but now it performs a number of other features:

* Clears any current initiatives. * Automatically creates a start of round marker, for tracking number of rounds. * Determines initiative for all tokens, and adds them to the track already sorted. * Marks them as being flat footed, unless they have an ability to prevent that.

To complicate things, there is also an option to make a Perception check for all tokens, and add them as surprised if they fail the given difficulty. 'Surprised' and 'Have Surprise' are now two token states that I've added. A surprise state is automatically removed when a token's turn comes up, as is flat footed (once they are no longer surprised). I did try a feature to automatically skip surprised tokens, but that caused problems with the event handler.

It's also possible to add new tokens to an existing combat, adding them as surprised or having surprise (in case you want to build up a list of participants by hand). They are automatically sorted into the combat in initiative order. 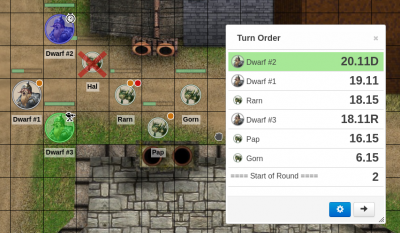 There is also some support for delayed and readied actions, making use of colour tints on the tokens themselves to make it obvious who has a delayed or readied action. This information is also shown in the initiative tracker itself. A token can undelay or unready at any point, in which case they will be added to the top of the initiative track, either after or before the current token (depending on whether it was a delay or ready).

Additionally, some house keeping is automatically performed when a token's initiative turn comes up. As well as un-flat footing them, an unconscious token will get an immediate stabilisation check, and regenerating or fast healing tokens will have that applied. There is also a new Weakened status that halts any regeneration for a round, that is automatically removed on a token's turn (I'm not certain this is correctly following the rules, but it's simple and consistent). Dead tokens are also automatically removed from the initiative track.

Finally, I've added a modification to how Mooks are handled at negative hitpoints. One issue I've had is that in a low level campaign like I've been running, many creatures have greatly more negative hitpoints than they have positive. A goblin with 4 hitpoints, can survive down to -11, so their hitpoint bar stretches off to the left, several times larger than the token itself. They also tend to stick around for ages.

To resolve this, a token's negative hitpoint limit is now capped at half their maximum hitpoints (normally it is their constitution score). Creatures with twice as many hitpoints as they have constitution are unaffected, and this only applies to a token which doesn't have the vision property set. The result is that low level critters should die a lot quicker once they are 'down', removing them from the initiative and need to worry about them.