You are here: Gaming and other Nonsense » News » Star System Map 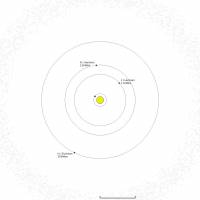 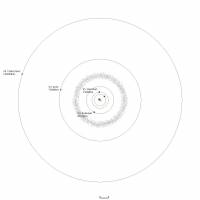 Work on the world generator is coming along slower than planned, but I'm currently starting work on generating the surface maps for worlds. In the meantime, there's also solar system maps which display the current positions of each of the planets in the system.

What is shown here is a system modelled on Sol, with several inner worlds, and asteroid belt and a couple of outer gas giants. Since the software is a simulation as well as a generator, the current position of the planets is shown according to the current time. At the moment, all planets follow circular orbits, with no real plans to expand on that. Though the map display only copes with a single star in the system at the moment, the back end database copes with binary and triple systems, so there is a plan to add in support for that at some point.

The asteroid belts are randomly generated (but using a fixed seed, so it's the same random belt each time). Individual asteroids orbit with their own period, since that's pretty trivial to do.

Generating maps and unique features of these basic planet types is what I'm currently working on. Actually producing populations and civilisations for the worlds is still some way off.